In Adventures In The Screen Trade, the seminal, tell-all 1983 memoir about the mercurial, white knuckle, roller-coaster ride that is making a living working in Hollywood, two-time Academy Award-winning screenwriter William Goldman famously said that when it comes to determining whether a movie will turn out to be a hit or a miss, “Nobody knows anything.”

While that almost always holds true, when the powers that be at Marvel Entertainment made the decision to release Black Panther during Black History Month, they knew doing so was anything but fortuitous. After all, this was the first and only time since Marvel Studios opened its doors in 1998, that a Black screenwriter, Black director, nearly all-Black cast, and a Black leading man, were all brought together to make a superhero movie starring a Black comic book character.

That it would go on to make Black History almost goes without saying.

All that said, looking back on it now, in this, the third anniversary of its initial release in February of 2018, what Marvel couldn’t have known then, or even possibly ever imagined, is that this labor of love would become the global phenomenon it is today.

For Black Panther didn’t just make Black History; it made history in and of itself on such a massive scale, and on so many levels, it makes nearly every superhero movie made before it, or since, pale in comparison.

More importantly, the success of Black Panther proved to skeptical Hollywood decision-makers, and aspiring Black screenwriters, directors, producers, filmmakers, actors and actresses alike, that movie goers around the world, will turn out in record numbers to see a black superhero in action on the silver screen.

And considering there is perhaps no more rarified company in the comic book lexicon than the real estate inhabited by mainstream Black superheroes – Marvel or otherwise, that’s really saying something.

Think about it. Were it not for the likes of Storm, Luke Cage, Falcon, and Blade, if T’Challa were to host a backyard cookout among his peers, he would pretty much be grilling for a party of one.

That’s precisely why his highness, the King of Wakanda was created in the first place.

The brainchild of visionary writer, Stan Lee, and iconic artist, Jack Kirby, the Black Panther first appeared in Fantastic Four no. 52 (July 1966) in a supporting role. In 1968, he joined the Avengers. And in 1973, he appeared in his own comic book for the first time.

The rest, as they say, is history.

Lee, a White man who was bravely carrying a torch in support of civil rights, diversity and inclusion decades before it was cool to be “woke”, made it crystal clear that he would not tolerate racism and bigotry of any kind. 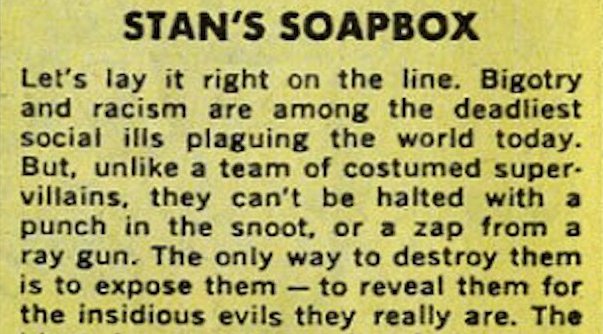 So much so, that in “Stan’s Soapbox”, a platform way ahead of its time, which gave him the power to speak his mind about the social and political issues of the times, Lee called his readers out in no uncertain terms. He did so because he thought it was his duty to let them know which side he was taking against the turmoil of the Civil Rights Movement, and the racial tension of the 1960’s and 70’s.

Where the franchise will go from here is anyone’s guess, especially given the tragic untimely passing of Chadwick Boseman, the brilliant young Black actor who brought T’Challa to life and made believers of us all.

One thing is for certain: We have not seen the last of The Black Panther.

Kevin Miles is an idea architect and a storyteller. You can experience his particular brand of Black Unicorn Magic shenanigans at kevinmileswriter.com